© Barry Dent and Fauna Recovery New Zealand, 2015-2022. Unauthorised use and/or duplication of this material without express and written permission from this site’s author and/or owner is strictly prohibited. Excerpts and links may be used, provided that full and clear credit is given to Fauna Recovery New Zealand with appropriate and specific direction to the original content. 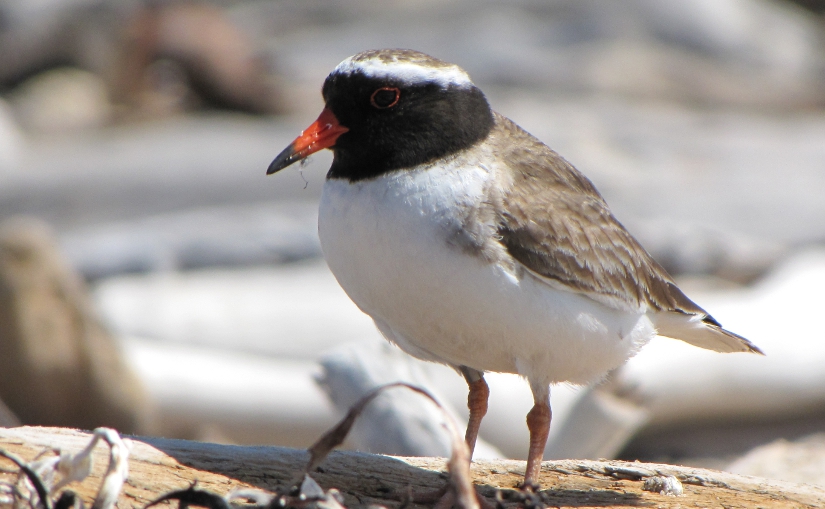 January 2013- Trustee Sue Freitag was looking forward to her trip to Waikawa/Portland Island, to help uplift shore plover eggs for transfer to Pukaha/Mt Bruce. There the chicks would enter the breeding program and improve the genetic diversity of the birds being pumped out to the various reintroduction projects around the country. We were upbeat about the second year of our financial involvement in this important project involving DOC and the private owners of Waikawa.  Unfortunately a scene of near-devastation greeted the landing party, with 60 of 82 adult shore plover missing, a fifth of the world population.  Dead birds of other species had the hallmarks of stoat predation, although emergency searches with trained dogs did not turned up stoats or rats. Project leader Helen Jonas from DOC and Sue agreed quickly on redirecting funds to a rescue mission, and all 12 eggs from the 5 nests found have been taken off. Nine hatched and the chicks were raised at Pukaha (in facilities upgraded using Fauna Recovery NZ funding) and the Isaac Wildlife Centre.

In their natural stronghold on Rangatira in the Chathams, shore plover are under constant aerial attack from skuas, but can still stay alive and protect their chicks.  They are ill-equipped to fight rats and stoats though and regrettably are very much the sentinel species that first indicates predator incursion onto our island sanctuaries.

By March 2013 the situation was even worse with the population down to 16, and such birds as could be were caught and removed to captivity. The team carried on with trapping and looking for rats or stoats, and the remaining shore plover largely held on and began to breed in the following Spring.

By February 2014 it was thought that the predator was dead, although not found, and tentative reintroductions were begun. In May some hair and scat samples collected on the island were confirmed as belonging to a Norway rat. By July the season’s releases of juveniles were complete, with the population standing at 18.

In March 2015 another 20 juveniles were moved on, but then a rat was caught in a trap. Intensive searching and trapping has not turned up any more and 46 shore plover went into Winter.

Thanks to Helen Jonas for her regular updates and to Denise Fastier for the photo. Fingers crossed.

Are shore plover the next conservation disaster?  Shore plover are hyper-susceptible to predator incursions, and establishing new populations is very slow  because of high dispersal rates.  What do you think about sending a batch down to Campbell Island- they won’t fly back from there, there is suitable habitat, and it should remain predator-free barring a shipwreck.