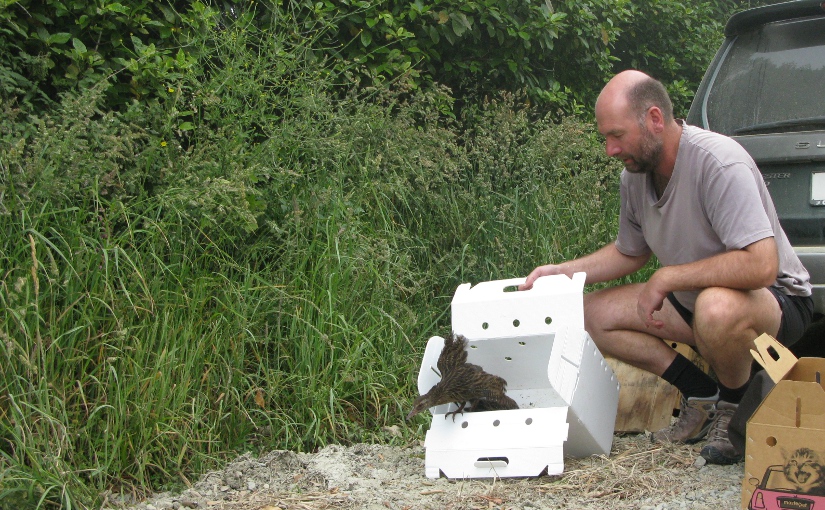 It was early in the piece that we decided Puangiangi needed to be given a fair shot at becoming the seabird island it once was. Our minds were focussed in December 2012 when we discovered sooty shearwater visiting one of the speaker sites.

Weka are known predators of seabirds, and are well known to attack chicks in their burrows or nearby. We now have lots of film of weka trying to get into the shearwater burrows on Puangiangi. Peter obtained a permit to remove weka from Puangiangi and to translocate them to the Garne and Saville Scenic Reserve about 30 minutes by car from French Pass on the mainland, which should be far enough away that they don’t swim back.

Weka were very obvious on the island when we arrived to begin the project in May 2012. My ultra-scientific estimate put the population at 20. We find that weka are drawn in to the field centre where they are attracted by food, shiny new plumbing fittings and for some reason my dive booties which they love to drag away. Through hand netting, cage trapping and even grabbing one while it was poking through our gear on the landing beach, we have caught 97 of the 20 as at June 2015. Encouragingly, the catch and encounter rates are much lower now, but we still know of one or two on the island. We can hear them calling from Tinui (where the population must be at carrying capacity), and Peter is aware of one on Wakaterepapanui, but we have no idea of the re-invasion rate if any from the other islands in the group.