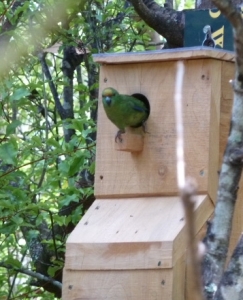 John Heaphy reports that transfer of captive-raised OFPs continued right through to 2014, with around 150 birds in total released on Tuhua. The birds are establishing and breeding, but numbers are not exploding by any means, which is a bit of a repeat of other OFP translocations. However, with that number moved, we must hope that a viable, genetically diverse population will remain on Tuhua, and not require ongoing management. There seems no obvious reason why the island is not full of parakeets by now, apart from a mite outbreak in 2013 which seems to have run its course.

John noted also some milestones with the project. In 2013 he photographed the first Tuhua-bred bird, herself breeding, with one of the older translocated males. John was also especially pleased that several pairs took to the nest boxes he installed, as he had his doubters that this attempt to extend the range of breeding sites would work.